[ACROSS LITE | PDF]
Solving Music: Yung Bae - Honey
Don't have much to say on this one. I figured after whatever was on TV last night, some people might want a bit of a break, so hopefully this puzzle will do. In addition to this puzzle, I had the New York Times puzzle yesterday; if you weren't able to solve it and would like to, shoot me a message over on Twitter, and we can make it happen. I also highly recommend Paolo Pasco's USA Today from yesterday (make sure to click the calendar icon and go to the 9/29 puzzle titled "Move On"); very smooth and fun puzzle.
Also, Adam Nicolle just launched a $25 (CAD) indie subscription called luckystreak xwords+ over on his site; it's a year subscription with a total of 50 exclusive puzzles. As someone who also likes puzzles on the Gen-Z wavelength, I highly recoomend that y'all go get in on that.
That's all I've got today; hope you guys have fun with it. I'll probably be listening to the new 44D album tonight and trying not to implode. Maybe playing some Among Us as well. See y'all soon, enjoy the puzzle!
SOLUTION: 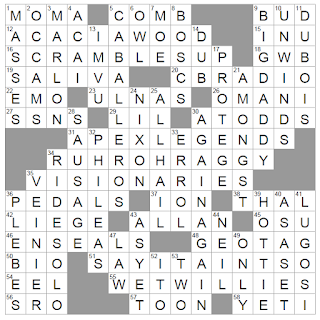 Join the crossword Discord Server, where we talk about puzzle solving and construction!
at September 30, 2020 No comments:

[ACROSS LITE | PDF]
Solving Music: LoveLeo - HEAD OVER HEELS
(video's weird but the song is a bop just trust me)

Collab! Most of this grid is actually Chris's fill; I did the 9-stacks in the corners, and when I told Chris I was using 1-Across in the puzzle (since he had told me about his personal take on it recently), he was eager to help with it and got me out of trying to fit long entries in the center that were never gonna work. Big kudos to him for getting some nice fill in the NE/SW, as well as for his really great clues (8, 32, and 51-Down are all him).
If you haven't already seen it, Amanda Rafkin hosted a guest puzzle from yours truly over on Brain Candy last week; go give it a try (and definitely check out Amanda's puzzles too, she posts pretty often)! Also, I just got word today that I have an upcoming New York Times puzzle two weeks from now (Tuesday the 29th), so be on the lookout for that. I'll definitely share it when it gets closer to then.
Thanks again to Chris for getting this one to where it is; enjoy the puzzle!
SOLUTION: 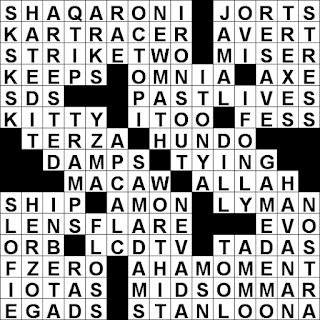 Join the crossword Discord Server, where we talk about puzzle solving and construction!
at September 15, 2020 No comments:

PUZZLE 29: IT'S A NATIONAL HOLIDAY

IT'S HATSUNE MIKU'S BIRTHDAY JUST LET ME DO ONE TRIBUTE PUZZLE OKAY
(EDIT: DAMMIT MIKU'S BIRTHDAY IS THE 31ST!!!! people on Twitter were celebrating it so I thought it was today but that's because it's already the 31st in Japan. whatever, this blog runs on Japan time now I guess)

I made this puzzle a while back and never got to cluing it; when I realized today was Miku's birthday and I didn't have anything prepared for it I had to finish this up and post it; the fill is admittedly rough, but I hope the theme carries it.

(Oh yeah, I should probably mention that this has a similar theme to a collab puzzle that'll be on this blog at some point in the future. That puzzle actually gave me the idea for this one, so when that collab drops just keep in mind that this one is the rip-off. kthx)

Speaking of collabs, I recently did a guest puzzle over on Et Tu, Etui?, which is probably my favorite indie puzzle site rn. They do self-aware shitposty puzzles, and they're so bad that they're hilarious (example: today's puzzle has NAM clued as ["Man up!"] and ARYA clued as [___ Stark? "Yes" (dialogue in "Game of Thrones", I guess)]). It's the kind of humor I've been wanting out of puzzles for a while, and I'm so happy someone's doing it, and that I was able to guest over there. 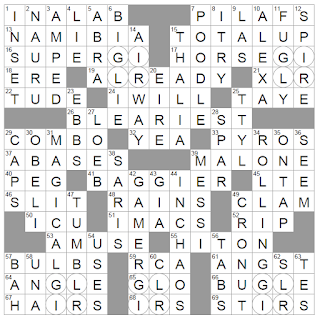 Email ThisBlogThis!Share to TwitterShare to FacebookShare to Pinterest
Labels: Medium

(Warning: The music video for this song has some flashing images; if your eyes are sensitive to that kind of thing, this video of the song doesn't have any of that.)

As you can see up top, I'm trying out the PuzzleMe applet for these posts now! Hopefully this is way more convenient for folks who'd like to solve these puzzles in-browser. Let me know if you have any issues with the solver.

Sorry for the weird hiatus, btw; I've been busy with some other puzzle stuff, including a few collabs that should be showing up here and on others' blogs in the near future. There should be more puzzles here in general in the coming weeks, so keep an eye out for them.

I wrote this puzzle exclusively so I could use 1-Across; I've been playing a ton of Project DIVA lately, and 1-Across is a neat technique that I thought would work well in a puzzle. If you're interested in Hatsune Miku and other Vocaloid music, I highly recommend Project DIVA; it's really addicting, and the newest game, Project DIVA Mega Mix, is available on Nintendo Switch.
Also! Lollapuzzoola is tomorrow; if you're gonna be participating in that, make sure to join the Crosscord server on Discord; we'll have a channel set up for Lolla talk, and we'll be playing some Jackbox games after the tournament (anyone's welcome to join in for Jackbox, even if you aren't participating in the tournament)! Hope to see you there! 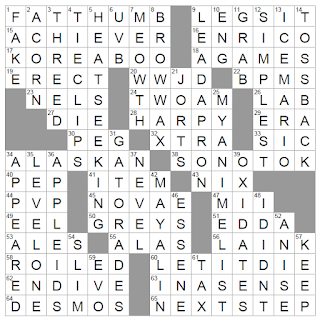 Join the crossword Discord Server, where we talk about puzzle solving and construction!
at August 14, 2020 3 comments: 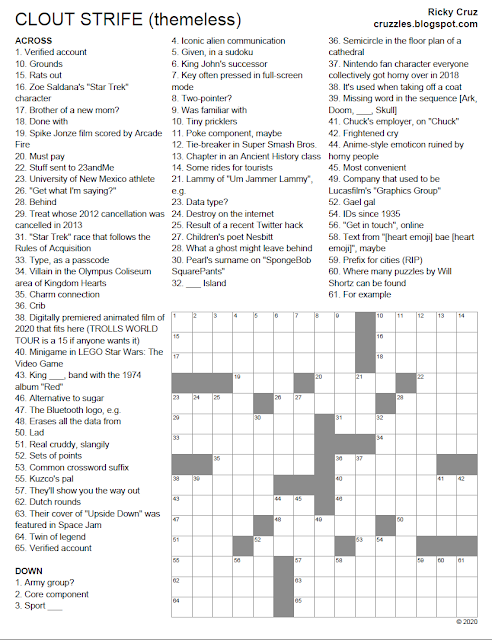 [ACROSS LITE | PDF]
Solving Music: Vaudeville Revival - Back to Bed
(This is my friend Luke's band; their new album "The Death of Los Angeles" is out now, and you can give it a listen on Spotify!)
Been a while since I've done a classic corner-stack setup, and with 1-Across and 65-Across being the same length, I thought it'd be a nice set to work into a themeless. This ended up being a really fun construction; lots of good bonuses, and not as much glue as I've been using recently. I've once again opted for some brutal cluing, so let me know how your experience goes.
By the way, if you haven't heard, Boswords is coming up this Sunday! The tournament will be held online this year; signups are only up for a few more days, so if you're interested, definitely head over to the website soon. At the time that you're reading this, the first practice run has probably already happened, but there'll be another one happening on Saturday before the tournament kicks off on Sunday. The tentative tournament schedule shows things running from noonish to 5 PM Eastern time, but it's probably good to plan a few hours around that just in case. I'm currently making arrangements to have a Boswords hangout area in the Crossword Discord (newly named "Crosscord") where people will be able to talk about stuff during and after the tournament. Click the link to Crosscord at the bottom of this blog post to join the server, especially if you're gonna be here for Boswords; hope to see you there!
Enjoy the puzzle!
SOLUTION: 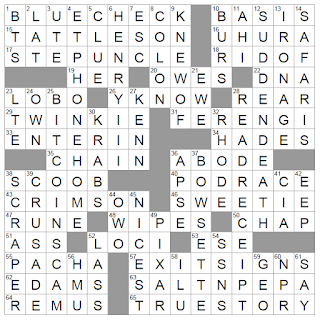 Join the crossword Discord Server, where we talk about puzzle solving and construction!
at July 22, 2020 No comments: 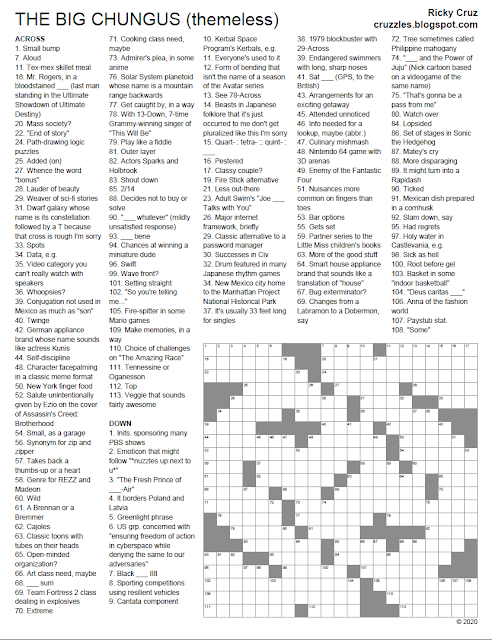 [ACROSS LITE | PDF]
Solving Music: Eve - As You Like It
The title has absolutely nothing to do with any entries in the puzzle. It's more representative of what the puzzle is: a 21x Cruzzles themeless, a big chonker of a grid crammed with gaming references and memes. It is the Big Chungus of puzzles. I'm so sorry.
This was a very fun one to construct; I took a similar strategy to what Byron Walden did for his themeless for the Couchword tournament. The puzzle was seeded with the four 14-letter words pinwheeling in the center: 52A/73A/10D/48D (the second half of 48D actually changed to improve fill, but it's all the same). All four were taken from the 14s section of my wordlist, which is the sad place where entries that are *almost* 15s go to die. I figured a chonky themeless would be the perfect place to finally use some of those 14s, and it definitely worked out. This is gonna play way harder if you aren't up on your pop culture; the center-right chunk in particular is filled to the brim with games/cartoons/comics stuff. Hopefully it's not all too niche.
Gonna use this space here to plug Grids For Good (let's be honest though, if you're following this blog, you've probably seen it shared around already). It's a collection of 42 puzzles from 44 constructors, available by forwarding them a receipt for a donation of $10+ to a COVID-related or racial justice organization (they have recommendations for orgs on the site). It's a great cause, so I'd highly recommend getting in on that soon (especially since some of those puzzles are metas with a contest deadline of the 18th).
Happy solving!
SOLUTION: 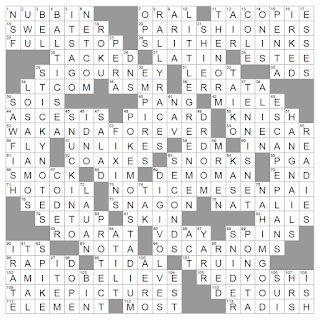 Join the crossword Discord Server, where we talk about puzzle solving and construction!
at July 09, 2020 No comments: 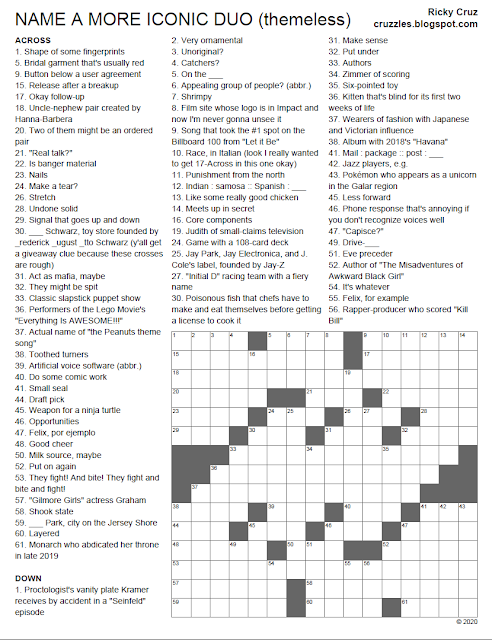 [ACROSS LITE | PDF]
Solving Music: fusq feat. MYLK - Blush
16-wide grid today; even though it's oversized, it's still well above the usual themeless word count, but uh, this isn't the usual themeless. You'll see.
We gridded this on-stream over on my Twitch a while back; I let the viewers pick a seed entry from my wordlist for the center slot, and we managed a really solid set of entries for the stair-stack. I think the fill isn't the most solid, but it should be pretty apparent why that is. Hopefully there aren't too many rough crossings, but this is almost definitely gonna play on the intense side, I imagine. Hope it's a good brain-scratcher.
[EDIT 6/22 12:08 AM] Looks like I didn't know how to spell "Jersey". The image above and the puzzle links have been updated to fix the typo in the clue for 59-Across. Do I need to make an apology video now?
SOLUTION:

Join the crossword Discord Server, where we talk about puzzle solving and construction!
at June 21, 2020 No comments: