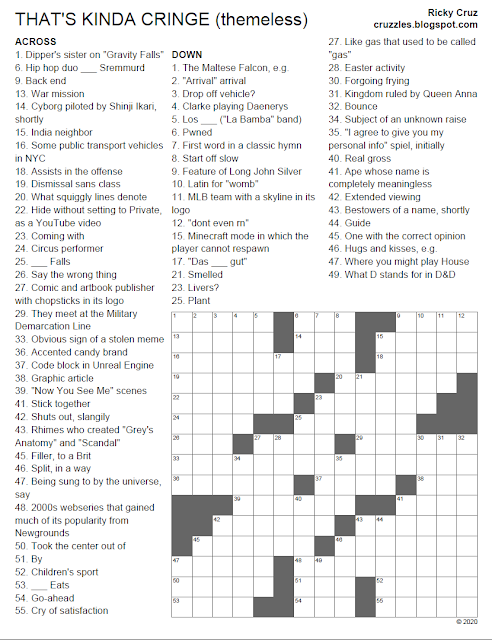 [ACROSS LITE | PDF]
Solving Music: 40mP - Torinoko City
New themeless today! This one was gridded on-stream over on Twitch; definitely a lot of fun to get feedback from other people, as usual. The spanner hit me after coming across it on Twitter, and from there I got some wonderful stacks going in the NW/SE. Hope you enjoy.
Btw, if you want a bonus puzzle, I made a funky word search that got some traction on Twitter the other day. Try it out if you'd like.

People keep telling me my crosswords are hard so I decided to make it easy on you guys and do a word search instead. Not easy enough? It should be: there's no right-to-left, up-and-down, or diagonal words. They only read left-to-right. pic.twitter.com/qhLZKRJs7e 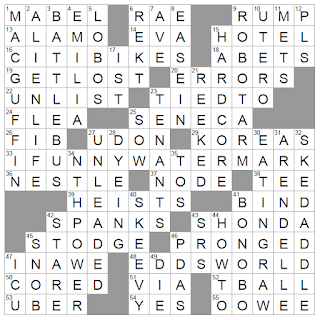 Join the crossword Discord Server, where we talk about puzzle solving and construction!
at May 28, 2020 No comments: 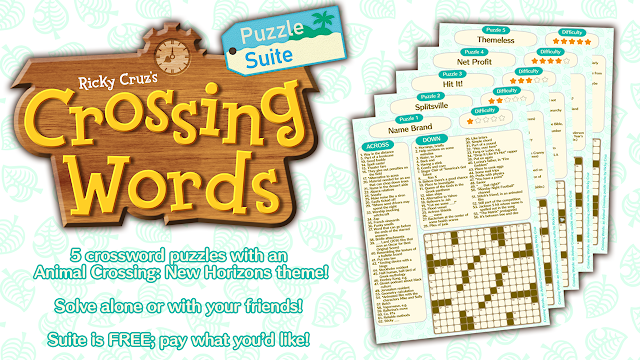 Hey guys! I've been spending the past month or so putting together an Animal Crossing suite, and today it's finally out!
Crossing Words is a suite of five puzzles themed around Animal Crossing: New Horizons. It's got four themed puzzles and finishes off with a tough themeless. Difficulties roughly correspond to Monday-Friday NYT difficulties (though Puzzles 3 and 5 are probably a bit tougher than most NYT Wednesdays/Fridays); I highly recommend solving these with friends/family to get the most out of these. I also recommend printing out the PDF and solving on paper (though .PUZ files are provided); some of these puzzles contain visual elements that don't translate to digital solving 100 percent, and I guarantee it's the best way to solve the suite.
The suite is completely free, but I've left the option to pay what you want available if you feel so inclined. This is my first experience with Gumroad, so if you have any difficulties downloading, let me know over on Twitter and we can get things worked out smoothly.
I've had a lot of fun putting the suite together (the visuals especially were fun to create), and I hope it's an enjoyable solving experience for you. Have a good time!
In case the embed down there is broken, you can go directly to the Gumroad page here.
Loading...
Join the crossword Discord Server, where we talk about puzzle solving and construction!
at May 23, 2020 No comments:

Email ThisBlogThis!Share to TwitterShare to FacebookShare to Pinterest
Labels: Announcement 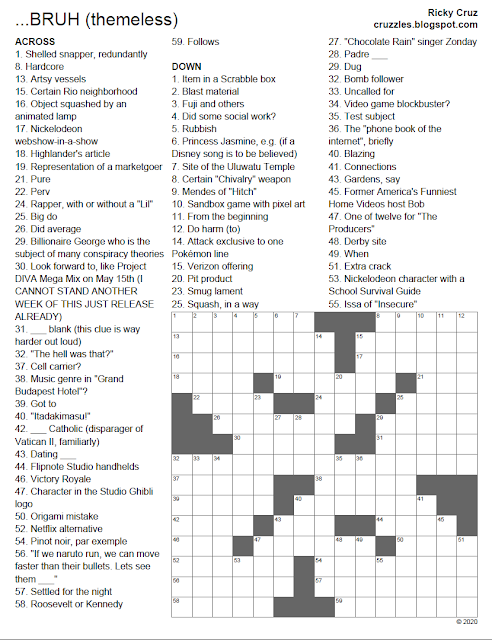 
Pretty standard themeless today. I started this puzzle off with the intention of making a grid to submit to the Times, but there were too many good options for nerdy fill that presented themselves, and I gave in. I think as a result, this puzzle has hit a happy medium between the super-niche stuff I've been putting out lately and general-audience fill. Less "you-know-it-or-you-don't" and more "unfamiliar but gettable" is the goal. Hope y'all enjoy. 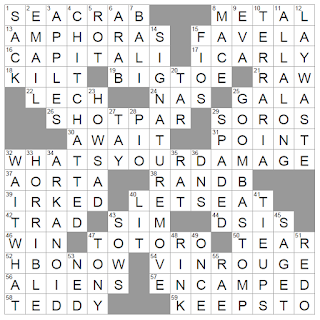 Join the crossword Discord Server, where we talk about puzzle solving and construction!
at May 07, 2020 No comments: 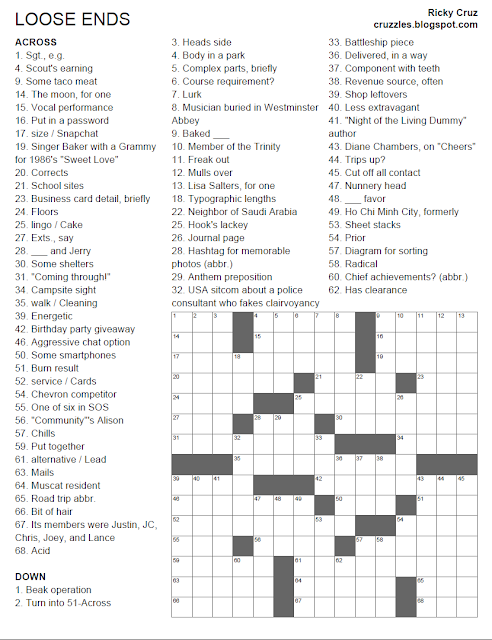 
Pulling a puzzle from the backlog today; this was originally made as an NYT submission a few months back, and was turned down (rightfully) for being too "cerebral" for the general audience (definitely using that word more often). When I got that feedback back, I realized that yeah, this theme's probably too tricky to try submitting for any general audience, so I slated it as a blog puzzle. You guys can take cerebral.

Since it's an older puzzle (one made for submission, at that), there's not nearly as much nerdy stuff as y'all are used to here. Thus is the way of the backlog.

Apologies for the lack of puzzle the past couple weeks; but there's a reason! I've recently been busting out puzzles for Crossing Words, an Animal Crossing-themed puzzle suite that I'm releasing later this month. The suite will have 5 puzzles, roughly corresponding with Monday-to-Friday difficulties (the final puzzle being a themeless). I'm not 100% sure how I'll be handling the release; I'd like to implement a pay-what-you-want system, that way anyone can solve the puzzles for free while still allowing for donations. No idea what services allow for that model, so we'll see. There'll be a fancy release post here on the blog when that drops, so be on the lookout for that!

Enjoy the puzzle, y'all. 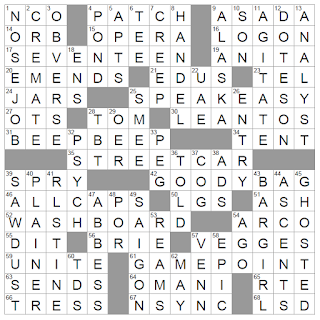