PUZZLE 7 - I AM AFRAID OF LARGE RABID DOGS 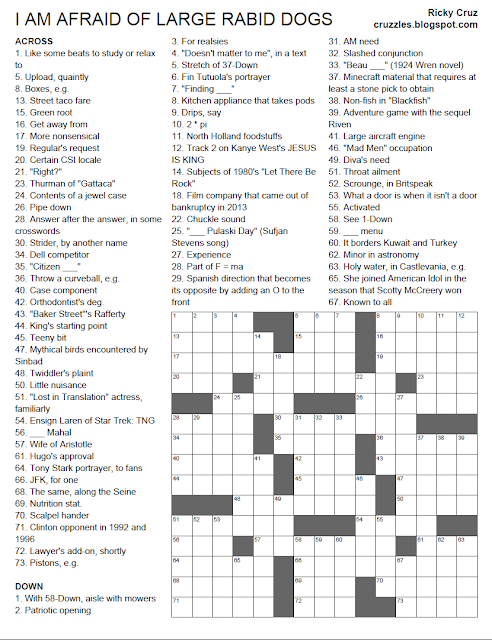 WARNING: You're definitely gonna want to solve this on paper. It'll solve in Across Lite just fine, but you can't discount the tactile feel of turning a page grokking this puzzle's theme.

It's another impulse crossword, but this time it's themed! Gridded last night, clued this afternoon. I've tagged this one as Hard not because of anything clue-related, but mainly because I think footholds in this grid might be tricky. Let me know what you think in the comments, over on Twitter, or in the crossword Discord server (y'all should join that server regardless, whether you're a solver or a constructor). Merry Christmas, and a happy new decade as well! 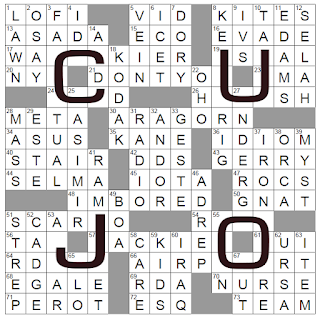 Email ThisBlogThis!Share to TwitterShare to FacebookShare to Pinterest
Labels: Hard 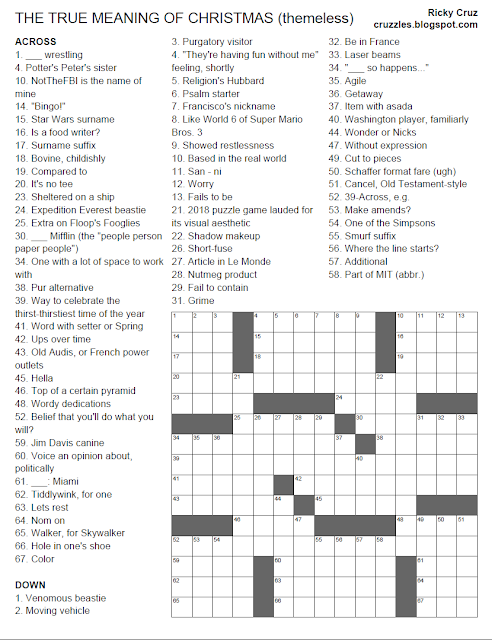 Here's an impulse crossword I made last month; you may have seen me live-construct this on Twitter already (puzzle spoilers at that link). As with the last puzzle, this one was made when I realized at 4AM that 39-Across is 15 letters; the rest is history. If all the gaming stuff in the last puzzle turned you away, this puzzle doesn't have nearly as much, so it may be more palatable. Enjoy the puzzle, and happy holidays! 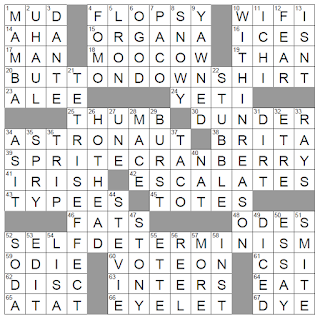 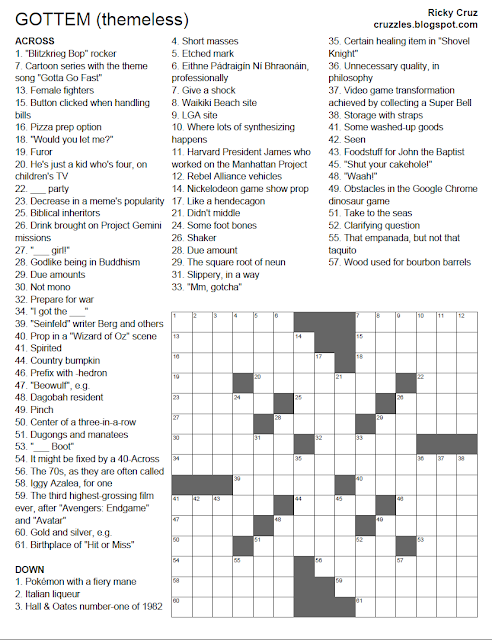 Here's an impulse crossword I made after realizing that 34-Across is 15 letters. If you follow me over on Twitter, you might have seen me realize this. This is the first impulse crossword I'm posting, so be wary that this is going to be way more pop-culture heavy than most of the puzzles I've posted, especially in terms of video games. Also, dupes between phrases (I wouldn't dupe full entries) might end up happening (this particular puzzle has a 3-letter word used in 3 different entries and I didn't notice until after I finished filling :/), so you've been alerted.

I'm particularly pleased with this themeless; I pushed the pop-culture-y answers up to eleven on this one, and I like how the fill worked out, aside from the triple-dupe. I might try a similar grid pattern to this in a NYT submission soon, as it made for some lively 8-stacks and gave nice opportunities for scrabbly letters. That, and the grid shape is really aesthetically pleasing. Hope y'all enjoy. 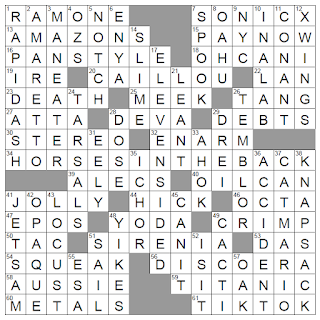 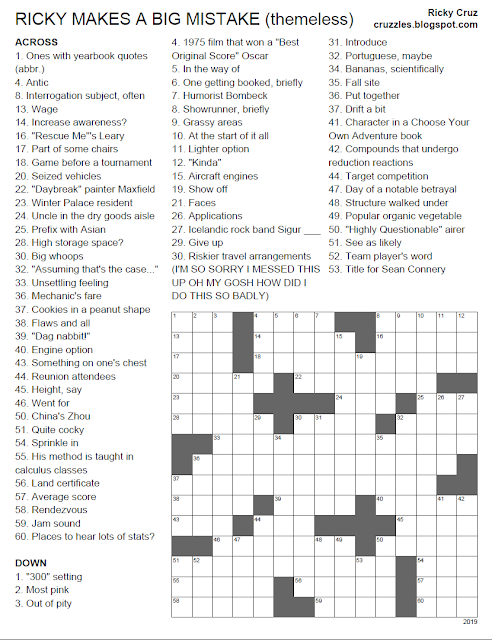 SOLVING MUSIC: Aesop Rock - Ash
(I was going to link Cat Food by Aesop Rock, but apparently most of his songs don't show up in Blogger's search results, I assume for copyright reasons. I tried sneaking it into the HTML and it broke the post, so this instrumental will have to do. Still a good one, but listen to Cat Food if you have the time.)

Apologies for the hiatus there, I got hit with a horrible flu, but we're good now. Coming back atcha with this themeless I both love and want to send to the depths of Hell. There's a story.

Back in July, I sent this puzzle to the NYT; I was really happy about how it worked out. For reasons you'll see when you solve, the central stagger-stack of 13s was actually really easy to get to function, and it made the whole gridding process way easier than most themelesses.

The issue is that 30-Down is a big giant stinking mistake, and I didn't find out I got the name wrong until I got the rejection email in October. Probably the worst part about the 3-month NYT feedback cycle is missing out on feedback like that for such an extensive period of time. But hey, you deal. I'll retry this kind of stagger-stack at some point and get an error-free version sent off to the NYT, but for the time being, we have this monstrosity. Hope you enjoy everything except for 30-Down. 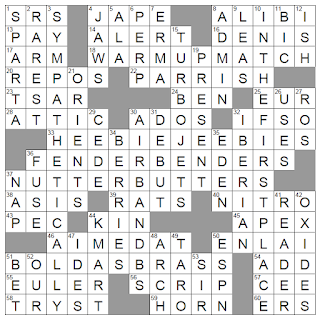